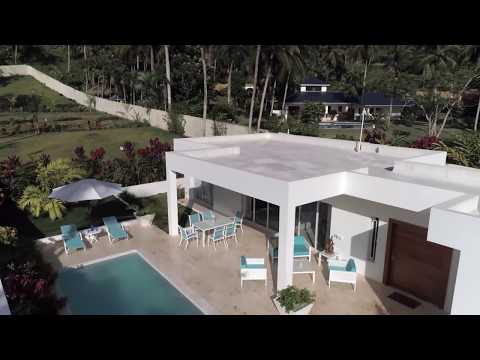 LAS TERRENAS IN THE CARIBBEAN
IN THE DOMINICAN REPUBLIC

The “Valle Verde” Residence project is located in Las Terrenas (Palmar de los Nidos) in a quiet and totally secure area, with road access leading up to the 1000 to 2000 m2 hillside villas; at the entrance of the path on the right, there is a USD 1 to 3 million villas project by Patrick Grellier (Galettes Saint Michel),

The proximity of the vast beaches of Coson by 4 minutes, the village within 4 minutes, and the Samana El Catey International Airport within 15 minutes, favors a quiet location but is also very well served,

In a neighborhood inhabited by Europeans (pharmacist, nurse, shopkeepers) all owners,

This type of investment far from the noisy crowd is increasingly targeted by a wealthy clientele looking for green spaces. Therefore, I chose to make this a place of quality to guarantee investment firstly, and to ensure the longevity of inheritance, as well as a real estate value in the future,

– Completely finished so that the project is ready for sale,
– Secured by a wall 2.40 H,
– Gated entrance,
– Electricity provided to the project via underground wiring, 75 KW transformer,
– Cabinet of 17 modules, distribution to each plot through underground tubes,
– Drilled 45 m deep, submersible drilling pump that feeds, via underground polyurethane tubes,      into a 80,000 L tank in gravitation, which returns the water by compressor and pump in an            underground network at each plot,
– All plots are planted with trees, lawns, shrubs and plants which separate them from each other,

All plots have their own title of ownership, guaranteed, and in the hands of the Office of Guzman-Ariza, Notary César Calderón,

Maintained by a Haitian gardener living onsite (a member of the church and with compliant immigration status), performing 5 ½ days of work/week, wages DOP 9,000/month,

This unique place displays 35 Kms of beaches, waterfalls and rivers, large green valleys, whales that come to reproduce themselves each year in the Samaná bay, while the International Airport Samaná El Catey, is only 15 min away.

The Dominican Republic is a stable country, and many enterprises or French groups have invested and have been part of the Dominican economy for a long time.

Finally, here there is no religious problem or racism. There is a majority of Catholics, but also Protestants and Adventists, and Dominicans will always welcome you with kindness and a smile, because it’s their nature.

The VIVA WINDHAM hotels chain which was already present in Las Terrenas just opened its second hotel for a total of 598 rooms in the Samaná Bay, at 5 minutes from Las Terrenas. –
http://www.vivawyndhamresorts.com

The Spanish group PINERO, which owns almost all the five stars hotel, including El Portillo one, at the exit of Las Terrenas, has total of 900 rooms in Las Terrenas, and is only a signature away to add 155 rooms. http://www.bahia-principe.com

The first hotel of Las Terrenas, “The Tropic Banana”, built around 30 years ago, was also bought by an investor and offers 115 luxury residential apartments. http://www.doncesarlasterrenas.com

And of course the prestigious ALIGIO Residence “77 apart-hotel” located in Las Terrenas downtown, in front of the sea. http://www.aligiohotel.com